One of the better things about living in Germany is that to some extent you’re guaranteed a summer of decent weather. In Britain, the mere thought of summer causes a biblical downpour that can only be stated by sacrificing a couple of cows and possibly a donkey to the weather gods. There is no sadder oxymoron than that of ‘British summer time’. This does, however, leave me somewhat at a loss when I can’t simply complain about shitty weather conditions. Despite the fact that it’s now too hot to wear my summer cagoule, I have found other aspects of Germany that can replace my genetic requirement for complaint. 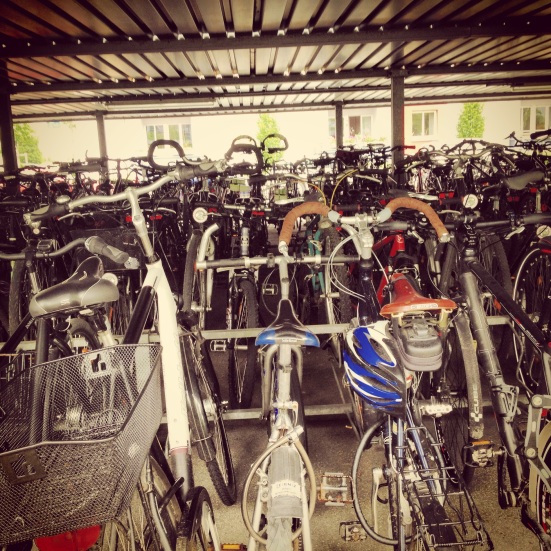 The winter months may be cold and bleak but at least the arctic tundra prevents cyclists from testing the validation of their life insurance policies. For reasons best known to themselves, once we hit May, the German government releases highly trained lunatics upon two wheels. I gather this is in order to test the awareness of all drivers, and then again maybe it’s a mass attempt at the most people to win a Darwin award.  Holland might be considered the hotspot of cycling but Germany is the certainly the hotspot of high vis merchants of death. It has become apparent to me, over the last month, that somehow Germans are under the misconception that a plastic helmet, trouser clips and a proficiency at puncture repair offer the same protection as armor plating and a working knowledge of The Force. It doesn’t, I’m afraid, and no amount of illegal maneuvers or cycling in my lane will turn you into the love child of Robocop and Obi wan Kenobi. The sooner they understand that, the sooner I can stop worrying about doing an injury to some brainwashed Kamikaze cyclist.

For those people that find random acts of masochism on a bicycle too slow, they can always upgrade to motor bike and attempt to kill themselves one hundred times faster. One day of sunshine is all it takes for you to find yourself on a country road, being forced to partake in an unscheduled game of chicken with some fruitcake with a Mad Max fetish. To some extent I can understand a nutter in a BMW going all Travis Bickle on the Autobahn but when your only protection from having a one on one with St Peter is a suit made of dead cow and elaborately painted head gear, you really should think twice. Even then, you’re lucky if their even wearing something vaguely safety orientated, I saw one guy wearing shorts and a t-shirt as he went billowing down the road. I may be wrong, but I’m fairly sure that those two items of attire insure you die in a flaming ball of asphalt.

British? American? Why not get away from it all with a nice relaxing holiday? Perhaps you could visit Germany? Sounds nice. While you’re there please make sure to speak really load English so we can identify you from 100km away. Also, if you see something nice please pull out your iPad and take every conceivable photo while everyone around is forced to accommodate your obliviousness. By the way, when did that become acceptable? I don’t remember anyone telling me ‘I bought an iPad for the camera, it’s great’. It wasn’t built for it, which is why everyone taking a photo on one looks like their filming an elaborate, yet ultimately ill-conceived hidden camera advert for Apple. I get it, you have an iPad. Well done. One good point about these people is that it’s led me to invent a series of new apps. First up is Twatograph, which after installation loudly proclaims ‘I am a Twat’ every time an iPad is used for anything other than surfing the web or playing angry birds. Second, I’ve called Insta-pain. This app will automatically send 100,000 volts through your hands whenever you move the iPad above shoulder level. Finally, my favorite is called Angry Knobs. Basically, you are free to photograph to your heart’s content except all your photos will look like a bored teenager has spent half an hour doodling knobs on all your photos. I’m waiting to hear back from Apple. Any day now I’m sure.

As far as I can tell, caravan holidays are very much a test of endurance and sanity. Surely after five hours pulling one of those things at 80kmh, the last thing you would want to do is sleep in it with a load of squawking children. Despite my viewpoint, it still seems to be popular Germany and even more so with the Dutch tourists who annually invade Germany to get to Italy, Austria or whatever hellish camper van site is in the vicinity. Good for them I guess, pottering along the motorway, carrying all their worldly goods and fifteen mountain bikes like they are performing an intricate experiment in insulting the laws of gravity. A lot of people complain that they take up the roads, cause traffic jams and generally annoy anyone who happens to be in the vicinity of one. In motion, I don’t mind them too much, but when they happen to be parked I slowly begin to lose my shit. I understand if you own a campervan, finding a parking space must be a pain in the arse. However, you decided to get one so that’s your problem. Well, actually in my village, caravan owners have decided to make it everyone’s problem too. It seems that at least half my street has invested in the two star, rolling crap cabins, and have found a simple answer to the old parking issue by just parking them up and down the street. Now I can feel the exhilaration of an SAS assault course form the comfort of my car seat, while simultaneously enjoying a real life Tetris experience without having to listen to dodgy Russian music. Thanks neighbor! Sorry, what’s that you said? No, I have no idea who stole your tires, smashed in the windows and defecated in the breakfast nook. Some people, eh?

We all have our fears, some are rational, some irrational. One that is directly in the latter category and that seems to be common among Germans is the fear of all drafts and light breezes. During the less clement times of the year, this isn’t much of a problem. Come the summer, any warm spell is accompanied with a chorus of windows being shut and air conditioners being switched off. Perhaps this stems from a rogue doctor telling a patient a bad joke or maybe it features prominently in school textbooks, I really don’t know. Either way, some Germans of a certain age will go bat shit crazy when you turn the AC on in the car. When we experienced a heat wave a few weeks ago, I watched an old man go around my local gym and close all the windows. When I asked why, he told me it was because ‘it’s unhealthy’. I know punching old people is frowned upon, but in these situations I’m sure we should be given a freebie.

2 thoughts on “Things To Hate In Summer”